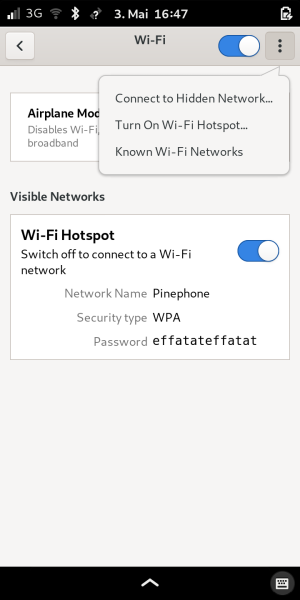 Far more power/battery efficient than sharing via WiFi hotspot; security is through Bluetooth pairing. Starting work from the Maemo wiki, requires changing to correct file names and locations for Mobian (this is from Maemo5 Linux) with an iptables MASQUERADE script. http://wiki.maemo.org/Bluetooth_PAN almost identical to the USB sharing below the link is to implementation in Maemo linux, those instructions will require modification to work on Mobian. Please edit this entry with instructions if you have it working.

Connecting the Pinephone to windows via USB

As at 11/22/2021, Mobian is setup to connect using the ECM protocol (see https://en.wikipedia.org/wiki/Ethernet_over_USB), which works well with Linux, but Windows instead requires network devices to connect using the RNDIS protocol. The connection protocol can be modified through the kernel filesystem interfaces.

In Mobian run the following:

Note: these changes are temporary and the old device will be re-created on a reboot.

In Windows the Pinephone often be allocated the wrong driver. To allocate the correct driver:

Setting up nftables with a minimal set of rules (only allow ssh from WLAN, USB, and LAN) is rather easy. Install nftables apt-get install nftables, enable the service via systemctl enable nftables and configure the policy accordingly in /etc/nftables.conf

Once done, load the new policy set using systemctl restart nftables. If you encounter issues and suspect this is due to the firewall, flush the rules by running nft flush fuleset.

There seems to be a bug in nftables when it comes to listing the rules using nft list ruleset. It does not provide the “input interface type”.